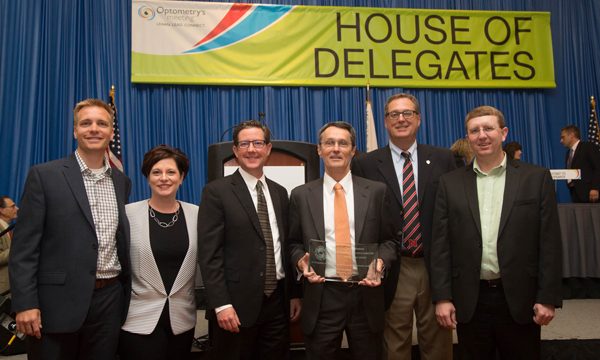 Dave was cited for his innovative programming, effective legislative relations, leadership development, and long track record of successful growth for the NOA. Under his leadership, the NOA has a membership percentage of 85% or better every year due to the work of the association office, and its PAC member participation is one of the best in the AOA. Dave conceived and developed an innovative Leadership Program to train future association leaders, which is serving as a model for many other state associations who are now developing similar leadership programs. In citing his strengths in the legislative arena, one of his nominators stated “his political connections, impeccable ethics, calm demeanor and wise strategies have put our association on top of the most respected lobbying groups at the state capitol. His political savvy has been instrumental in passing all of our legislative bills over the last 25 years.”

Dave has 40 years’ experience in managing associations and non-profit organizations. He is in his 27th year serving as NOA Executive Director. He has twice received citations from his state association in recognition and appreciation of dedicated service to optometry, and was the 2013 recipient of the Heart of America Contact Lens Society Vision Service Award for extraordinary dedication and untiring service to the profession of optometry.

Dave has been involved in many community activities and is the recipient of various awards and recognition for service and achievement. In 2006, he received the top honor from the National Association of Insurance and Financial Advisors (NAIFA) Board of Trustees for excellence in association management, as well as being honored by the NAIFA-Nebraska Board of Directors for exemplary service to the association. Dave is a member of the American Society of Association Executives (ASAE), the Nebraska Society of Association Executives (NSAE), Leadership Lincoln Alumni Association; International Association of Optometric Executives; and serves on the Pinnacle Arena Advisor Board.